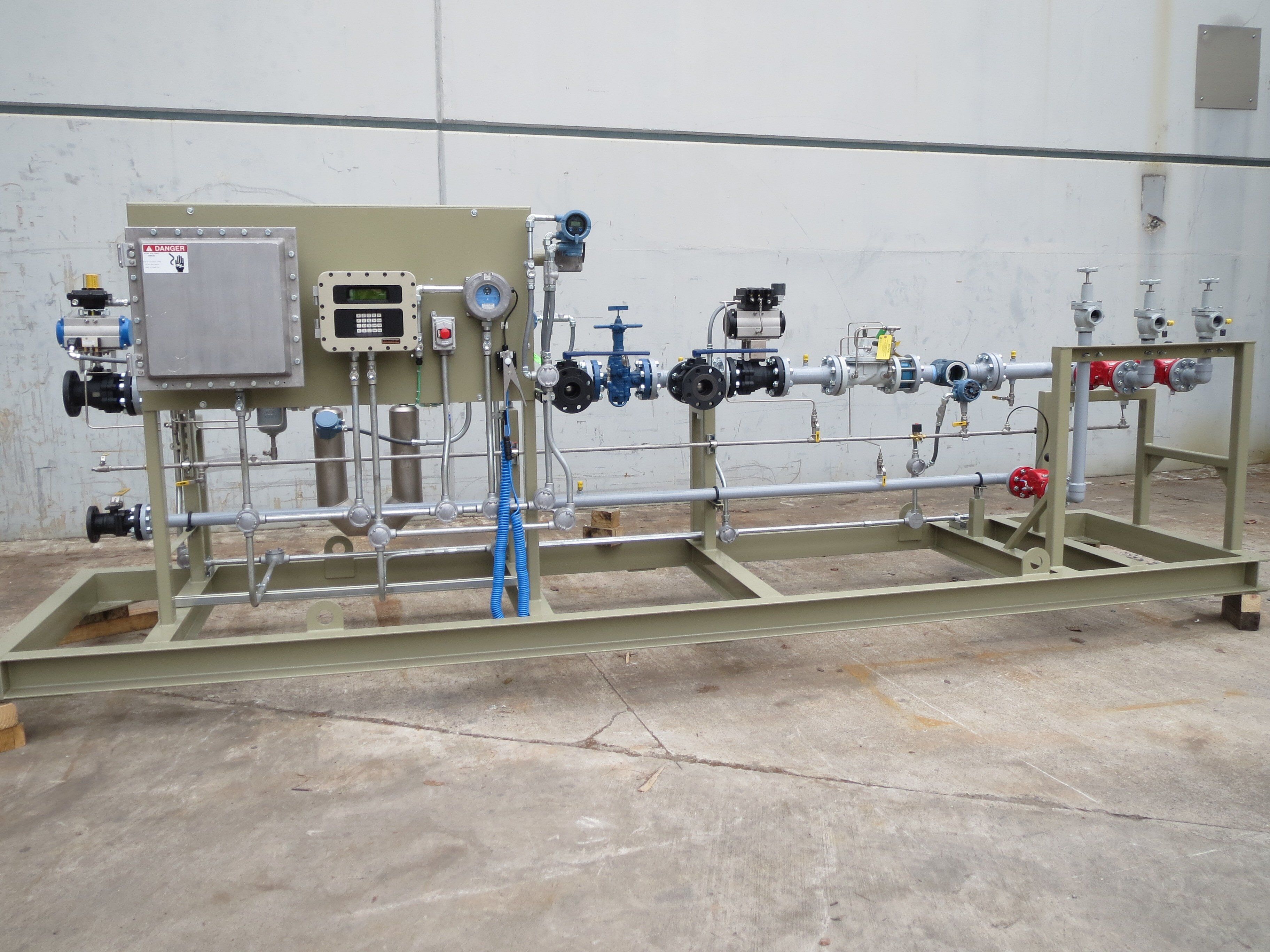 Is a custody transfer application hard to design?

There are a multitude of considerations that one must take in order to load and unload propane. From logistical issues related to terminal design and automation, rail car loading racks with fall protection, mobile transloading units if doing rail to truck transfer, bullet tanks, compressor skids used for rail offload, and pump skids needed for barge loading. Wow, what is the solution? Propane Truck Custody Transfer Metering Skids was our solution.

One area to examine more closely, that pops up frequently, is how to safely load trucks utilizing a custody transfer metering skid that will print a BOL and include permissive that will shut down a system in the event of an emergency or loss of grounding during the filling operation. 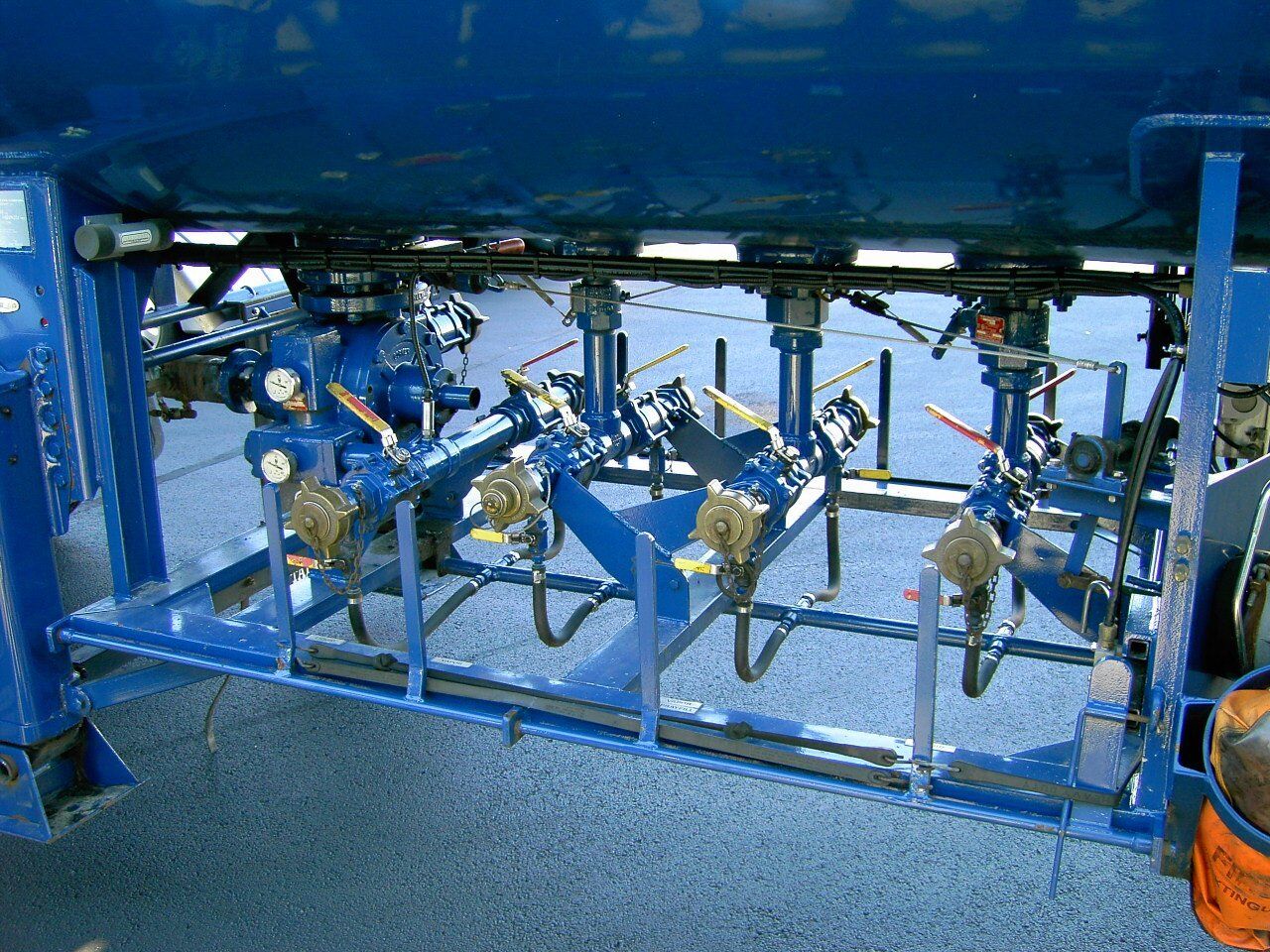 What to consider when designing a custody transfer metering skid?

To examine this, let’s walk through a typical custody transfer metering skid system for propane. Let’s assume the pumps feeding the truck loading skid are located near the bullet storage tanks area and in this case, we are loading odorized gas. Note, an odorization meter and injection systems can easily be included in the design. As part of the design criteria, consideration of applicable codes from ANSI, API, ASME, NFPA and NEC are to be included. In addition, OSHA regulations regarding lifting, bending and trip hazards should be included when looking at the use of hoses and loading arms connecting the skid to the truck. From the environmental side we should take a look at couplers and fittings mating the truck to a hose or loading arm and how to minimize or eliminate vapors from escaping to atmosphere. We will address loading arms, hoses and coupler systems further down.

Other design considerations include flow rates which can be affected by the trucks filling connections (see Fig. 1 – Typical Propane Truck Fill Connections) as well as its internal liquid and vapor connections, working pressures, looking at the pressure drop between storage and the truck loading skid, is necessary in order to size pumps, and operating temperature looking to ensure you don’t measure vapor instead of liquid. 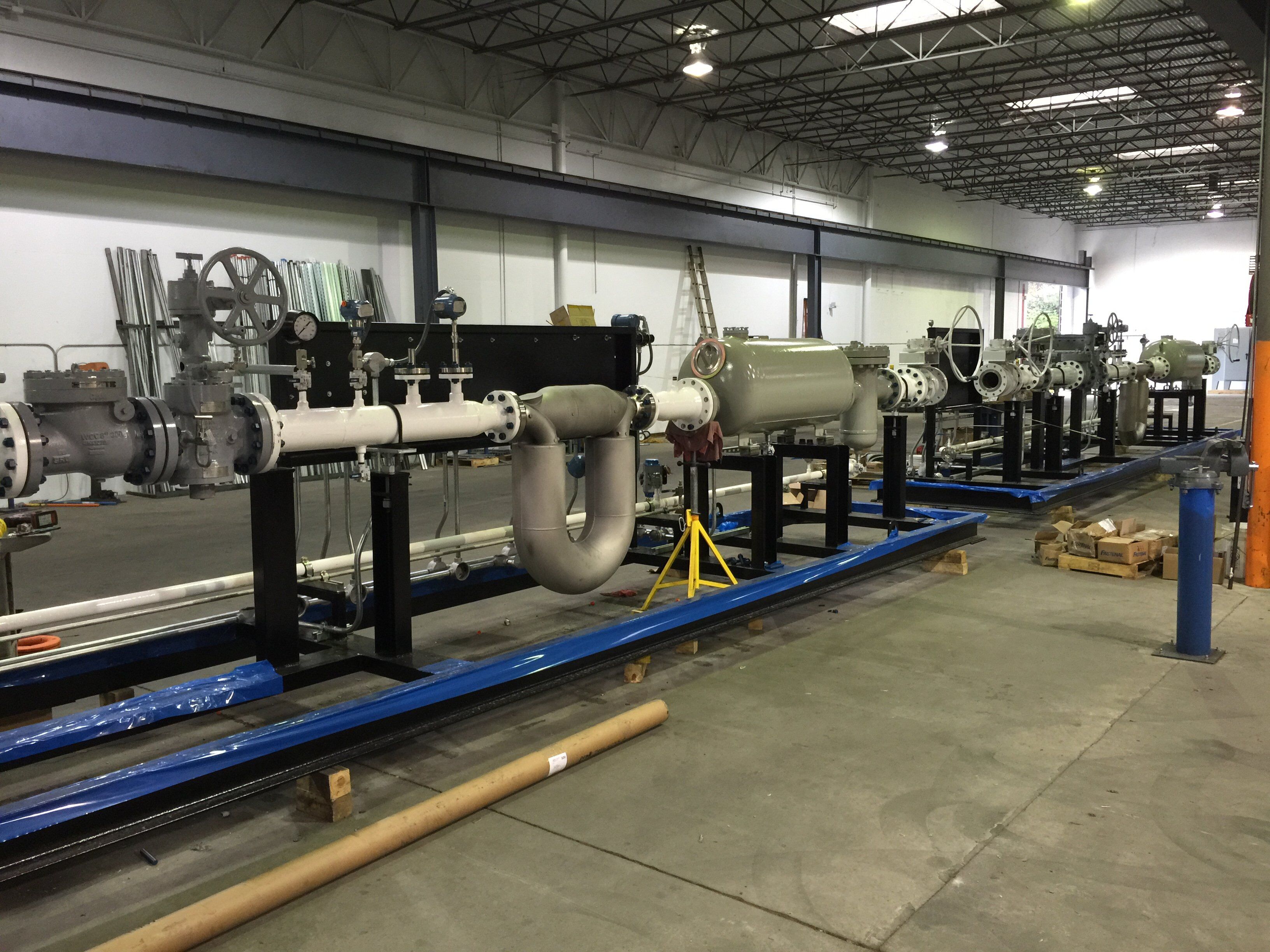 Components of a propane metering skid will include an automated control valve, such as ones made by OCV Control Valves, with a pneumatic or electric actuator used in part to shut down the skid in the event of an emergency such as loss of grounding, as part of the skid automation package.

What is the purpose of a control valve?

The control valve also acts as a “throttle” to allow controlled opening when starting to fill the truck to prevent product surge and controlled closing when the load is complete preventing line shock. The control valve in a transfer metering skid is also used to provide back pressure control. The integrated controls package looks at temperature and pressure, sending a signal to adjust the valve position as necessary for accurate metering. The loading systems also include manual valves on each end of the skid at the inlet and outlet piping, used to isolate the transfer metering skid for maintenance. A strainer at the skid inlet prior to the meter is included to collect particles that could cause damage to the meter. 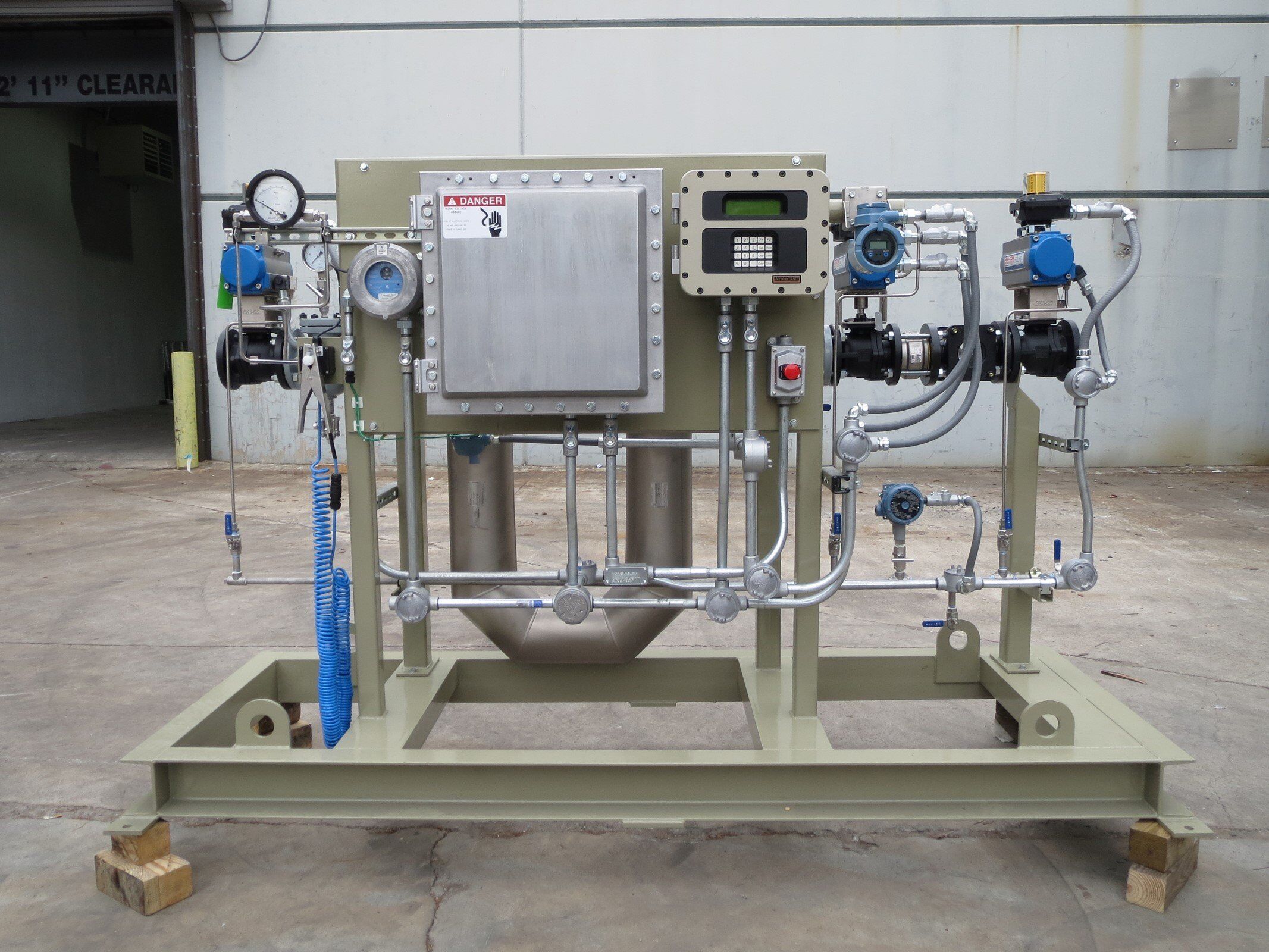 What is a certified custody transfer meter?

A certified meter is required for custody transfer applications and must meet state weights and measures criteria and be certified. There are several meter type choices such as turbine meters which are the lowest in accuracy, PD meters which are very accurate or Coriolis meters made by Micro Motion (see Fig. 2), which are the most accurate. Consulting with a knowledgeable expert, you can make a valued decision on which technology fits your specific needs. Some criteria for choosing a custody transfer meter include a look at long term cost of ownership and skid downtime. With PD meters being mechanical as example, they have moving parts that will wear over time effecting accuracy and require maintenance. This ongoing cost should be considered. With Coriolis meters, which have a higher up front cost, there are no moving parts in the meter that can wear out. In addition, Coriolis meters, out of the box, allow you to measure density without the addition of a separate densitometer unlike when using the mechanical meters. Also, with the latest technologies available from Micro Motion, self-diagnostic instruments allow real time meter health checks.

What is meter proving?

Next we need the capability to do meter proving. In custody transfer applications, it is necessary to check meter calibration since this is considered a “sale”. How often this is required depends on the specific requirements of an agreement between two parties. Some are on an annual basis, some are more often. Meter proving is done to prevent loss by identifying meter issues before they can lead to major lost revenues. A prover manifold will include a double block and bleed valve required to look for seal leakage between the meter on the skid being tested, and the meter proving device which can include a master meter or small volume prover. The double block and bleed valve ensure all product going through the meter on the skid goes through the prover system. Typically meter proving is done by a state licensed third party in compliance with state Weights and Measures per National Institute of Standards and Technology Handbook 44 requirements for high flow propane meter proving. 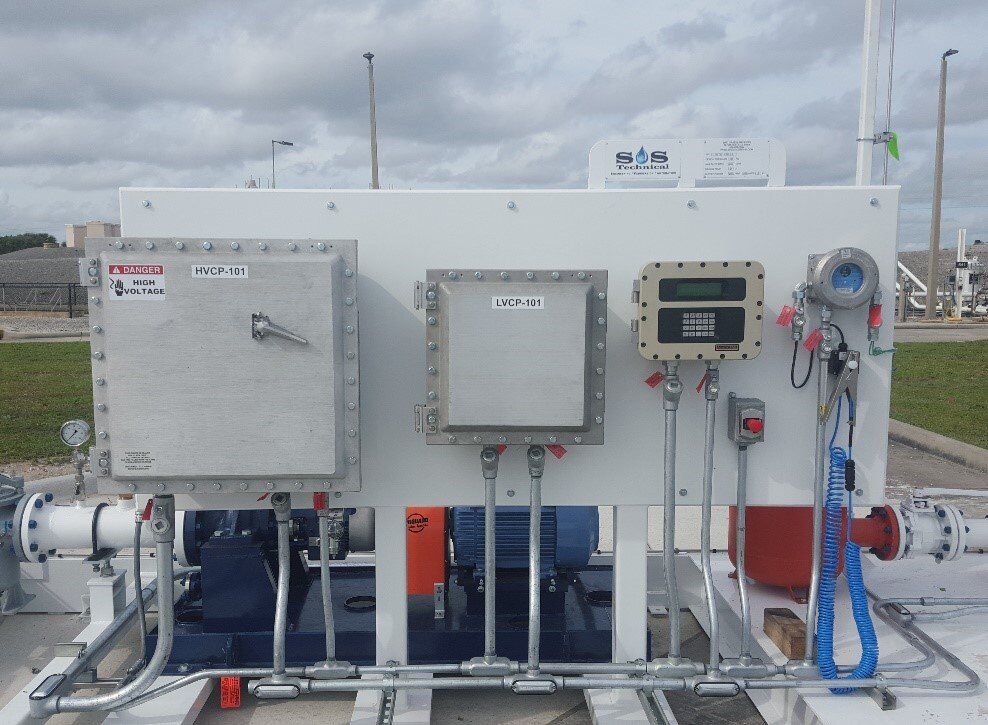 When to use a batch load controller?

A load controller is typically used, such as an FMC Accuload III (see Fig.3), to allow an operator to set the volume of product to be loaded and will include visual indications of flow, temperature, pressure, and include permissives for emergency shut down. The load controller will operator the solenoid on the automated control valve to regulate back pressure, flow rate, throttle start up and shut down before and after loading. The load controller will also capture data require for custody transfer showing as example amount of product metered, temperature, time of day, date, and driver information and output to a printer in order to print a BOL. Printers can be located at the truck loading area, connected to the skid via Ethernet cable from the load controller to a control room or drivers shack or the data can be sent wirelessly to any connected print station. Other technology such as Bluetooth and 4G can be utilized. Key card systems can also be included that will only allow pre-authorized drivers to load trucks. The load controller can then capture a specific driver’s information and truck number for example.

Why ground verification is important?

Ground verification systems are necessary to ensure no static discharge occurs from the build up of static in hoses or loading arms when connecting or disconnecting from trucks. A ground verification unit such as systems manufactured by Newson Gale (see Fig. 4), will provide a visual indication (red/green light) and will allow for a permissive signal monitored by the load controller. If there is no ground connection between the skid, hose or arm and the truck, loading cannot begin. If a ground connection is lost during filling, the system will automatically shut down. Other safety devices include emergency shut down valves used to shut down the skid locally or remotely via the use of E-Stop stations that can be placed on or near the skid or via remote signal from a control room if the skid is integrated with the a plant DCS system. Also, fire sensors, and gas detection can be included and connected to the load controller to initiate skid shut down in an emergency.

Skid instrumentation will include a visual dial pressure gauge as well a pressure sensor and transmitter and temperature transmitter. Skid piping will be all Sch. 40 carbon steel with 300lb ANSI Class flanges welded in accordance with ASME B31.3. Electrical will include a Nema 7 rated enclosure, and welds will be 100% X-ray.

A bulkhead will be included on the truck side of the skid used for loading with thermal relief valves and in some cases excess flow valves. The bulkhead is used to mount hoses or loading arms and should include breakaway units to prevent product leakage in case the truck “drives off” or “pulls away” with the hoses or arms connected to the truck. This also prevents damage to the skid piping if an incident were to occur. The bulkhead in most cases will include product lines and a vapor return line if required to relieve pressure from the truck during loading.

The choice between hoses or loading arms in designed truck custody transfer systems include many criteria. Hoses are less costly, and can be quickly replaced but require ongoing cost for hose inspection programs and are subject to damage from being driven over, can kink or bend, and can be a trip hazard leading to injury if left lying on the ground (see Fig.5) where good housekeeping practices are not utilized. Operator lifting and bending can be of concern related to strains and back injury with hoses having items like heavy globe valves and ACME fittings on the ends, and hoses can burst, which, when under pressure, can cause severe injury. Newer hose designs such as ones manufactured by Smart-Hose Technologies, utilize built in internal breakaway units and don’t require a separate breakaway device to be installed on the bulkhead saving money. In the event of a drive off incident, it’s likely with a standard LPG service rated hoses, the hose will have to be replaced. Loading arms such as those made by Emco Wheaton have a higher initial cost but can last 20 plus years as they are hard pipe systems and don’t require an inspection program. Swivels have seals and will require maintenance at some point depending on usage. 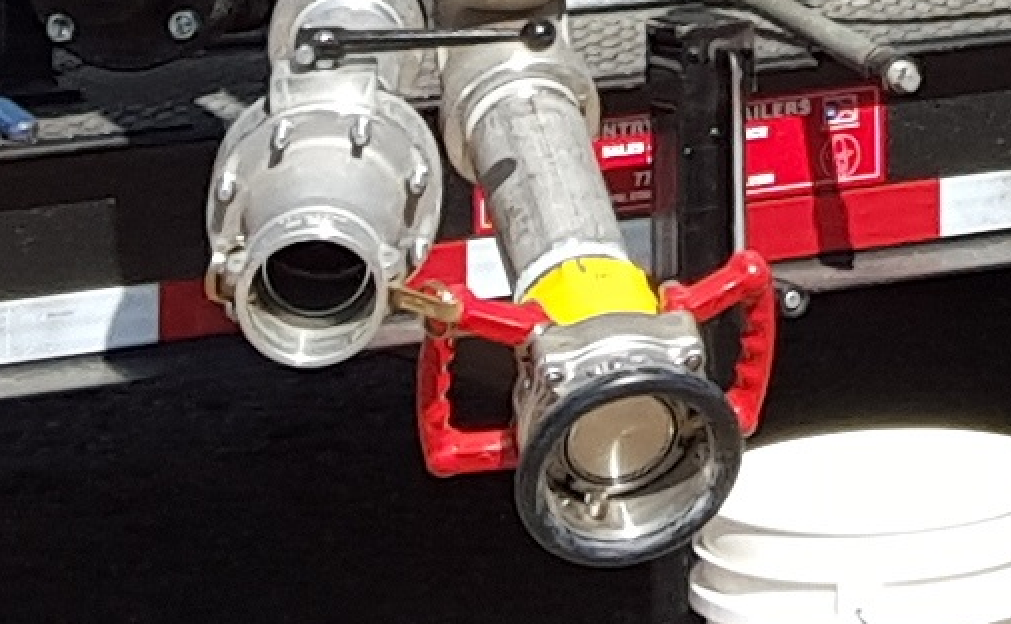 In conclusion, good planning, recognition of the various codes and regulations, consideration of how the operator has to do his or her job, and utilization of today’s technology available, will ensure you get a system that is reliable, accurate, safe, and works.

For more information on Propane truck custody transfer meter skids for your next project or upcoming terminal, give us a call or Request A Free Quote.

Talk To One Of Our Engineers Today Request a Quote

We offer a true 'one-stop-shop' experience. Headquartered in Atlanta, Georgia - we take care of engineering, fabrication, automation and integration. Talk to one of our engineers today for a custom fluid and gas handling solution for your next project or facility.