Over the last few years, the need to transport, measure, and process condensate has grown exponentially. With the oil and gas market growing more and more competitive, companies are working to squeeze all potentially usable products out of their once by-product. S&S Technical was recently approached by a customer to design and manufacture a condensate truck offloading skid. The main driver of the project was lead time. They needed two engineered from scratch, fully functioning systems on site within 6 weeks.

While the system for one of the sites was very simple, the system for the second site was far more complex and required acute attention to detail without the luxury of time. At this particular site, the customer would be offloading two different style trucks with two very different product pressures. After a day or two of conversation, S&S was able to deliver a preliminary P&ID for a system to fit their needs. It was determined that the use of two booster pumps would be needed for the lower pressure condensate and only one for the higher pressure. In no time the customer was able to review the P&ID and approve it so the engineers could start on the 3D model. 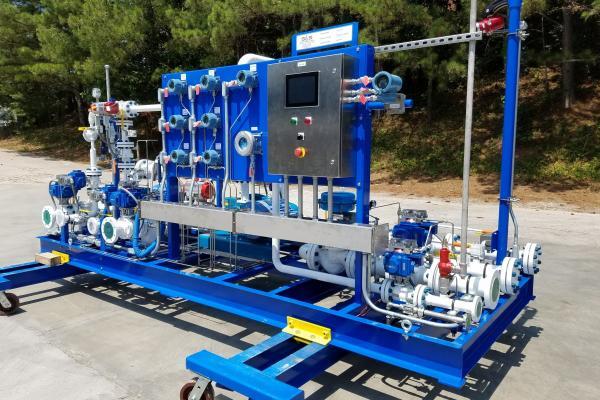 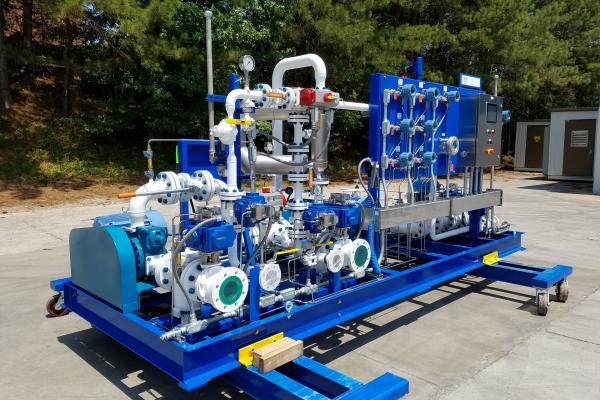 During the process of the model creation, it was brought to light that a cement foundation had already been poured for this skid and there was already electrical conduit and process piping run underground to the pad. This meant that S&S now had to create a solution around what

was already existing. It equated to taking a skid that would normally be 25 feet long by 8 feet wide and reducing it to only 16 feet long and 6 feet wide by the manipulation of pipe routing and some creative thinking. Alongside the mechanical team, S&S Technical’s electrical team got to work on the controls solution.

At the beginning of the project, it was determined that the system would be controlled from the plant DCS and would only be receiving commands and sending feedback. Without a “canned” controller to accommodate this system, it was up to S&S to design and program the customized controls. As the design began to unfold, it became clear that the customer was beginning to change their mind on the purpose of the skid. After various design meetings, it was determined that the systems controls would now be autonomous and run the skid rather than simply sending and receiving data from the DCS. Even though the change required a different approach, more controls components and quite a bit more programming, S&S knew the promised delivery date still had to be met.

When designing a system, two very important key considerations are safety and ease of maintenance. The safety aspect is inclusive of both personnel and equipment. Items such as Allen Bradley emergency push button stations and Newson Gale grounding units were put in place to help protect personnel. In the event of a serious emergency, the e-stop could be pressed and the entire system would go into a safe mode as well as sound an alarm that could be heard throughout various locations in the plant.

The grounding system helps to ensure the truck is properly grounded to the skid in order to prevent the possibility of a spark caused by static electricity. This has become a grave concern for many facilities around the world as each year multiple accidents, some fatal, occur due to vapor ignition set off by static electricity. As a standard, S&S has used the grounding units as interlocks within the controls so that the system cannot run unless the truck, or rail in some applications, is grounded.

On the equipment protection side of things, various pressure transmitters were installed and logic written in order to avoid damage to the transport trucks. In this particular case, the bladder in the low pressure trucks were only able to handle a fraction of the pressure that could be handled by the high pressure trucks. The skid had a designated inlet for low pressure only and one for high pressure only. Both style trucks were built with the same fittings from the manufacturer. This made it challenging to create a mechanical interlock which forced a design built around an electrical interlock.

Once a truck hooks up to its respective inlet and is set up to offload, there is a pressure transmitter to determine whether it has hooked up to the correct skid inlet. This prevents the possibility of a low pressure truck being over pressurized due to hooking up to the high pressure side. Much like the grounding interlock, the transmitter would not allow the system to run if it sensed the truck was hooked up to the incorrect spot.

While the safety part of the equation was fairly simple to put into place, the ease of maintenance factor proved to be a bit more of a challenge. As mentioned before, having to work within a predetermined space meant that the mechanical engineers no longer had the freedom to build the skid in a way they normally would to account for system maintenance. One change to help mitigate the maintenance hardships was the ability to go to a new style electro pneumatic actuator.

In the past, these actuators took up quite a bit of real estate on top of the valve. This made reaching around them or trying to get under them to work on other components nearly impossible without removing the actuator from the valve. A new manufacturer has developed a design that takes the once clunky actuator and shrinks it substantially. This not only saves space on the system itself, but allows the maintenance crew to easily work around them.

Even with the challenges and changes along the way, S&S Technical was able to deliver a product that not only worked, but exceeded the customer’s expectations. Before the system shipped, the customer was invited to come to S&S Technical’s facility to perform a factory acceptance test in order to ensure the system worked as the customer expected. During the FAT process, the customer continually commented on the craftsmanship of the work, cleanliness of the facility, and all around great attitude and professionalism of the staff.

In today’s market, clients have many options when selecting manufacturers for projects like this. Working with a company who has your best interest in mind, who will ensure all stake holder considerations are taken into account, and who can provide proven solutions, will help guarantee they get a system that is safe and functions exactly as expected.

Talk To One Of Our Engineers Today Request a Quote

We offer a true 'one-stop-shop' experience. Headquartered in Atlanta, Georgia - we take care of engineering, fabrication, automation and integration. Talk to one of our engineers today for a custom fluid and gas handling solution for your next project or facility.